This article will show you how to use the Create Object method in VBA.

VBA is an Object Orientated Language – it uses procedures to control and create Objects.

Similarly, we can create a new instance of PowerPoint or Access.

We can also use Create Object to create objects other than the Application Object.  We can use it to create an Excel Sheet for example.

In all of the examples above, we are using Late Binding – hence we declare the variables as Objects.  We can also use Early Binding by setting a reference to Word or PowerPoint in our VBA Project and then writing the Sub Procedure as shown below. To understand more about Late and Early binding, click here.

Firstly for Early Binding, within the VBE, we set a reference to Microsoft Word.

In the Menu bar, select Tools > References and scroll down to find the reference to the Microsoft Word 16.0 Object Library. 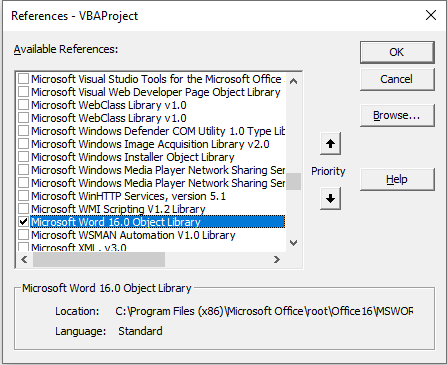 Make sure the reference is checked, and then click OK.

NOTE: the version might not be 16.0, it all depends on what version of Microsoft Office you are running on your PC!

Now, we declare the Object using Early Binding – this means that, instead of declaring the wdApp as an Object, we declare it as a Word.Application.   The rest of the code is the same as when we used Late Binding above.