Numbers come in all kinds of formats in Excel worksheets. You may already be familiar with the pop-up window in Excel for making use of different numerical formats: 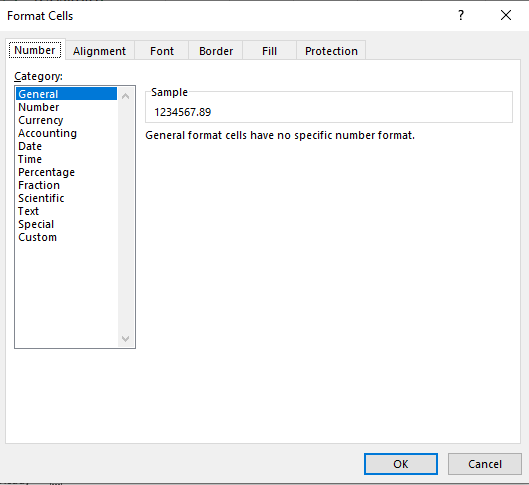 Formatting of numbers make the numbers easier to read and understand. The Excel default for numbers entered into cells is ‘General’ format, which means that the number is displayed exactly as you typed it in.

Also, without showing the thousands separators, it is difficult to see how large a number actually is without counting the individual digits.  Is it in millions or tens of millions?

From the point of view of a user looking down a column of numbers, this makes it quite difficult to read and compare. 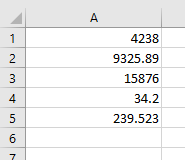 In VBA you have access to exactly the same range of formats that you have on the front end of Excel. This applies to not only an entered value in a cell on a worksheet, but also things like message boxes, UserForm controls, charts and graphs, and the Excel status bar at the bottom left hand corner of the worksheet.

The Format function is an extremely useful function in VBA in presentation terms, but it is also very complex in terms of the flexibility offered in how numbers are displayed.

How to Use the Format Function in VBA

If you are showing a message box, then the Format function can be used directly:

This will display a large number using commas to separate the thousands and to show 2 decimal places.  The result will be 1,234,567.89.  The zeros in place of the hash ensure that decimals will be shown as 00 in whole numbers, and that there is a leading zero for a number which is less than 1

The hashtag symbol (#) represents a digit placeholder which displays a digit if it is available in that position, or else nothing.

You can also use the format function to address an individual cell, or a range of cells to change the format:

This code will set the range of cells (A1 to A10) to a custom format which separates the thousands with commas and shows 2 decimal places.

If you check the format of the cells on the Excel front end, you will find that a new custom format has been created.

You can also format numbers on the Excel Status Bar at the bottom left hand corner of the Excel window:

You clear this from the status bar by using:

This example will add the text ‘Total Sales’ after each number, as well as including a thousands separator 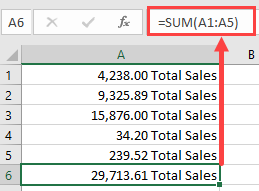 Note that cell A6 has a ‘SUM’ formula, and this will include the ‘Total Sales’ text without requiring formatting.  If the formatting is applied, as in the above code, it will not put an extra instance of ‘Total Sales’ into cell A6

Although the cells now display alpha numeric characters, the numbers are still present in numeric form. The ‘SUM’ formula still works because it is using the numeric value in the background, not how the number is formatted.

The comma in the format string provides the thousands separator. Note that you only need to put this in the string once.  If the number runs into millions or billions, it will still separate the digits into groups of 3

The zero in the format string (0) is a digit placeholder. It displays a digit if it is there, or a zero. Its positioning is very important to ensure uniformity with the formatting

In the format string, the hash characters (#) will display nothing if there is no digit.  However, if there is a number like .8 (all decimals), we want it to show as 0.80 so that it lines up with the other numbers.

If there was only one zero to the right of the decimal point, then the result would be ‘0.8’ and everything would be displayed to one decimal place.

Using a Format String for Alignment

You can use a question mark (?) within your format string to do this.  The ‘?’ indicates that a number is shown if it is available, or a space

This will display your numbers as follows: 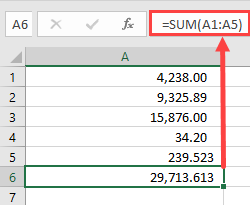 All the decimal points now line up underneath each other.  Cell A5 has three decimal places and this would throw the alignment out normally, but using the ‘?’ character aligns everything perfectly.

You can add any literal character into your format string by preceding it with a backslash (\).

You may also want to indicate that the numbers are in millions in the following example:

This will produce the following results on your worksheet: 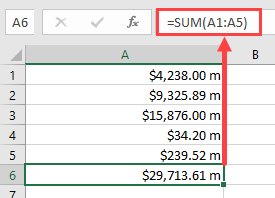 This will display ‘mill’ after every number within the formatted range.

You can use most characters as literals, but not reserved characters such as 0, #,?

Use of Commas in a Format String

We have already seen that commas can be used to create thousands separators for large numbers, but they can also be used in another way.

By using them at the end of the numeric part of the format string, they act as scalers of thousands. In other words, they will divide each number by 1,000 every time there is a comma.

In the example data, we are showing it with an indicator that it is in millions. By inserting one comma into the format string, we can show those numbers divided by 1,000.

This will show the numbers divided by 1,000 although the original number will still be in background in the cell.

If you put two commas in the format string, then the numbers will be divided by a million 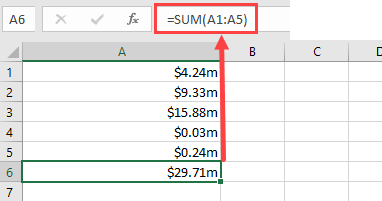 You could set up conditional formatting on the front end of Excel, but you can also do it within your VBA code, which means that you can manipulate the format string programmatically to make changes.

You can use up to four sections within your format string.  Each section is delimited by a semicolon (;). The four sections correspond to positive, negative, zero, and text

In this example, we use the same hash, comma, and zero characters to provide thousand separators and two decimal points, but we now have different sections for each type of value.

The first section is for positive numbers and is no different to what we have already seen previously in terms of format.

The second section for negative numbers introduces a color (Red) which is held within a pair of square brackets. The format is the same as for positive numbers except that a minus (-) sign has been added in front.

The third section for zero numbers uses a color (Green) within square brackets with the numeric string the same as for positive numbers.

The final section is for text values, and all that this needs is a color (Blue) again within square brackets

This is the result of applying this format string: 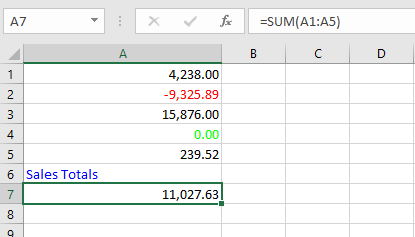 You can go further with conditions within the format string.  Suppose that you wanted to show every positive number above 10,000 as green, and every other number as red you could use this format string:

This is the result: 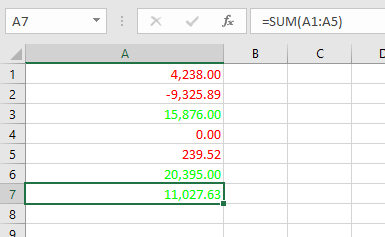 Fractions are not often used in spreadsheets, since they normally equate to decimals which everyone is familiar with.

However, sometimes they do serve a purpose. This example will display dollars and cents:

This is the result that will be produced: 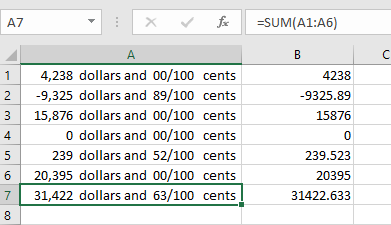 Remember that in spite of the numbers being displayed as text, they are still there in the background as numbers and all the Excel formulas can still be used on them.

This will format the current date to show ’08-Jul-2020’. Using ‘mmm’ for the month displays the first three characters of the month name.  If you want the full month name then you use ‘mmmm’

You can include times in your format string:

‘hh:mm’ represents hours and minutes and AM/PM uses a 12-hour clock as opposed to a 24-hour clock.

You can incorporate text characters into your format string:

You can also use literal characters using a backslash in front in the same way as for numeric format strings.

Excel has a number of built-in formats for both numbers and dates that you can use in your code.  These mainly reflect what is available on the number formatting front end, although some of them go beyond what is normally available on the pop-up window.  Also, you do not have the flexibility over number of decimal places, or whether thousands separators are used.

This format will display the number exactly as it is

This format will add a currency symbol in front of the number e.g. $, £ depending on your locale, but it will also format the number to 2 decimal places and will separate the thousands with commas.

This format displays at least one digit to the left but only two digits to the right of the decimal point.

This displays the number with the thousand separators, but only to two decimal places.

The number is multiplied by 100 and a percentage symbol (%) is added at the end of the number.  The format displays to 2 decimal places

This converts the number to Exponential format

This displays ‘No’ if the number is zero, otherwise displays ‘Yes’

The result will be ‘Yes’

This displays ‘False’ if the number is zero, otherwise displays ‘True’

The result will be ‘True’

The result will be ‘On’

This will display the date as date and time using AM/PM notation.  How the date is displayed depends on your settings in the Windows Control Panel (Clock and Region | Region). It may be displayed as ‘mm/dd/yyyy’ or ‘dd/mm/yyyy’

This will display a long date as defined in the Windows Control Panel (Clock and Region | Region).  Note that it does not include the time.

This displays a date as defined in the short date settings as defined by locale in the Windows Control Panel.

Displays a short date as defined in the Windows Control Panel (Clock and Region | Region). How the date is displayed depends on your locale. It may be displayed as ‘mm/dd/yyyy’ or ‘dd/mm/yyyy’

Displays a medium time as defined by your locale in the Windows Control Panel. This is usually set as 12-hour format using hours, minutes, and seconds and the AM/PM format.

Displays a medium time as defined in Windows Control Panel (Clock and Region | Region). This is usually set as 24-hour format with hours and minutes

Users can easily alter these settings, and this will have an effect on how your dates and times are displayed in Excel

For example, if you develop an Excel application which uses pre-defined formats within your VBA code, these may change completely if a user is in a different country or using a different locale to you.  You may find that column widths do not fit the date definition, or on a user form the Active X control such as a combo box (drop down) control is too narrow for the dates and times to be displayed properly.

There are a number of different parameters that you can use when defining your format string:

User-Defined Formats for Dates and Times

These characters can all be used in you format string when formatting dates and times: