In this tutorial, you will learn how to initialize, open, and close a Userform using VBA.

For this example, we created a simple Userform called basicUserform shown below with a label, a textbox, and three command buttons. 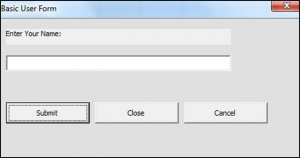 Use the Show Command to open the Userform called basicUserform:

You can close a form using the Unload Command:

This will close the UserForm from within running code.

Instead, you can also use the Me keyword to close a form within the form’s code module:

Note: You can only use Unload Me in procedures contained in the Userform Code Module:

You can access the UserForm Code Module by double-clicking on the module in the Code Explorer (on the left). Or by right-clicking in the UserForm visual editor.

Initialize a Userform in VBA

When a form is loaded, the “Initialize” event is triggered. You can use this event to change the UserForm appearance such as populating combo boxes or turning controls on/off in your initialization code.

This code will disable the Cancel button when the UserForm is launched: 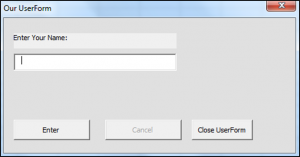 Note: This code must be placed in the UserForm code module (see picture above).