This article will demonstrate how to parse a string in VBA.

Often we will use Excel to import data from other files. Occasionally this data might be in a format that is not very user friendly, or that we need to amend to bring the information into Excel in a logical way. There are a number of string functions we can use in Excel VBA to extract the data correctly from the string that is brought in.

If the string comes into Excel as a delimited string (ie separated by commas, semi-colons, etc.), we can easily split the string into the individual values by using the Split function.

For example, say we have this string of names:

Using the split function, we can return these names to Excel individually: 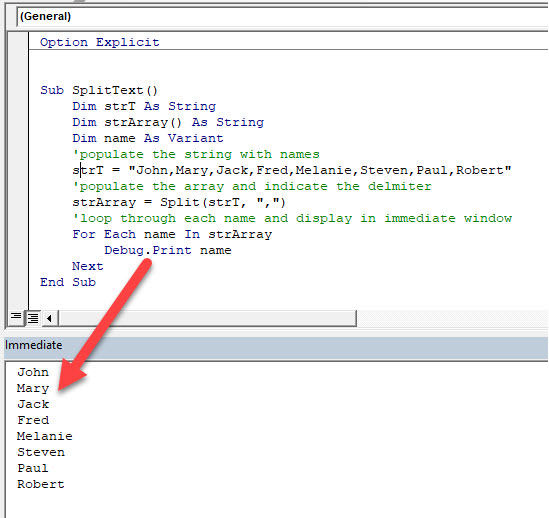 We can also extract data from strings by using the Left, Right and Mid functions.  They are not as efficient as using the Split function to get multiple values from a string, but if you need to separate a line into specific areas, they can be useful.

To get the drive that the file is stored on we can use:

To get the Path including the drive we can use:

To get the name of the file only, we can use MID:

To get the extension of the file we can use:

The result of which would be:

Another useful string function to manipulate strings in Excel, is the Replace function. This can be used to remove anything from a string and replace it with something else. This is particularly useful if the string that you have brought into Excel has characters that your coding will not recognize, or will mess up your data.

We can replace the double-quotes with commas using the Replace function.