This tutorial will demonstrate how to remove duplicates using the RemoveDuplicates method in VBA.

When data is imported or pasted into an Excel worksheet, it can often contain duplicate values.  You may need to clean the incoming data and remove duplicates.

Fortunately, there is an easy method within the Range object of VBA which allows you to do this.

Technically, both parameters are optional. However, if you don’t specify the Columns argument, no duplicates will be removed.

The default value for Header is xlNo. Of course it’s better to specify this argument, but if you have a header row, it’s unlikely the header row will match as a duplicate.

In order to show how the example code works, the following sample data is used: 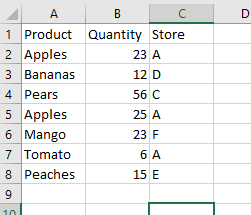 This code will remove all duplicate rows based only on values in column A:

Notice that we explicitly defined the Range “A1:C8”. Instead you can used the UsedRange. The UsedRange will determine the last used row and column of your data and apply RemoveDuplicates to that entire range:

UsedRange is incredibly useful, removing the need for you to explicitly define the range.

After running these code, your worksheet will now look like this: 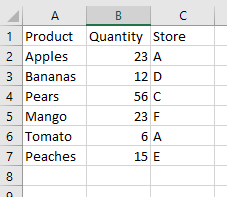 Notice that because only column A (column 1) was specified, the ‘Apples’ duplicate formerly in row 5 has been removed. However, the Quantity (column 2) is different.

To remove duplicates, comparing multiple columns, we can specify those columns using an Array method.

The Array tells VBA to compare the data using both columns 1 and 2 (A and B).

The columns in the array do not have to be in consecutive order.

In this example, columns 1 and 3 are used for the duplicate comparison.

This code example uses all three columns to check for duplicates:

Removing Duplicate Rows from a Table

The RemoveDuplicates can also be applied to an Excel table in exactly the same way. However, the syntax is slightly different.

This will remove the duplicates in the table based on columns 1 and 3 (A and C).  However, it does not tidy up the color formatting of the table, and you will see colored blank rows left behind at the bottom of the table.

If you need to remove duplicate values from an array, of course you can output your array into Excel, use the RemoveDuplicates method, and re-import the array.

However, we also wrote a VBA procedure to remove duplicates from an array.

The RemoveDuplicates method only works on columns of data, but with some ‘out of the box’ thinking, you can create a VBA procedure to deal with rows of data.

Suppose that your data looks like this on your worksheet:

You have the same duplicates as before in columns B and E, but you cannot remove them using the RemoveDuplicates method.

The answer is to use VBA to create an additional worksheet, copy the data into it transposing it into columns, remove the duplicates, and then copy it back transposing it back into rows.

After running the code, your worksheet will look like this:

The ‘Apples’ duplicate in column E has now been removed. The user is back in a clean position, with no extraneous worksheets hanging around, and the whole process has been done smoothly with no screen flickering or warning messages.