This tutorial will demonstrate the use of VBA Constants.

A constant is similar to a variable and is declared in a similar way.  There is, however, a major difference between them!

What is a Constant

We will use the constant in our code, and the program will also access our constant. Unlike a variable, where the actual value can change while the code is running, a constant value never changes.

Constants use the same data type as Variables.   The most common data types for Constants are as follows:

To see a complete list of all data types used by Variables and Constants in VBA, click here.

In VBA, we have to use a Const statement in order to declare a Constant.  We can declare constants in a similar way to declaring Variables – at Procedure Level, at Module Level and at a Global Level.

Declaring a Constant within a Procedure

To declare a Constant at Procedure level, we declare it inside the procedure.

When we run the code, the message box will return the constant values. 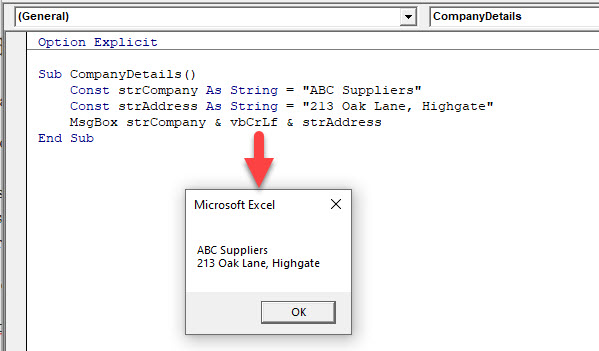 Because the Constant is declared at Procedure level, we  can declare a Constant with the same name in a different Procedure.

If we run the second Procedure, the Constant value stored in that Procedure is returned. 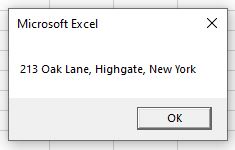 Declaring a Constant within a Module

If we want a Constant value to be available to all Procedures within a Module, we need to declare the constant at Module level. 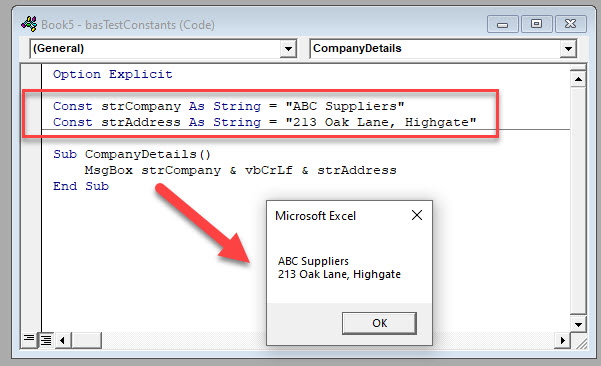 This will make the same constant available to multiple procedures WITHIN that module only. 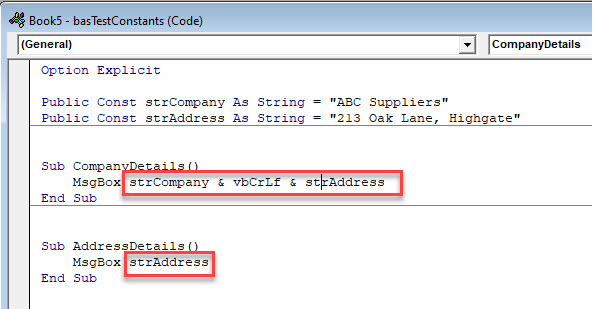 Should you use the Constant in a different module, an error will occur.

Declaring Constants at a Global Level

You can declare Constants at a Global Level which would then mean you can use them in all the Modules contained in your entire VBA Project.

To declare a Constant as a Global Constant, we need to put the word PUBLIC in front of the declaration statement.

This will allow the Constant to be used in all the modules regardless of where is is declared.