The VBA Int data type is used to store whole numbers (no decimal values). However as we’ll see below, the Integer values must fall within the range ‑32768 to 32768.

To declare an Int variable, you use the Dim Statement (short for Dimension):

As mentioned above, Int variables can only store values between ‑32768 to 32768. If you attempt to assign a value outside that range to an Int variable you’ll receive an error:

When you click on de-bug, the code will break at the ‘populate the integer line as an integer cannot store a number as high as 50000.

Instead, you can declare a variable with the Long data type:

Why would you use Int variables instead of Long variables?

Therefore, if you were to run the procedure below:

You would get the following result (rounding down):

However, this code below:

Would return the following message box (rounding up):

If you want to store a decimal place, you would need to declare a variable that allows for decimal places.  There are 3 data types that you can use – Single, Double or Currency.

The Single data type will round the decimal point slightly differently to the double and currency data type, so it is preferable to use double to single for accuracy.  A double can have up to 12 decimal places while currency and single can both have up to 4 decimal places. 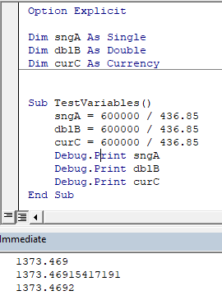 For further information about these data types, you can have a look here.

In the previous examples, we’ve declared the Int variable within a procedure. Variables declared with a procedure can only be used within that procedure. 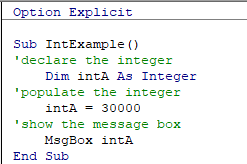 Instead, you can declare Int variables at the module or global level. 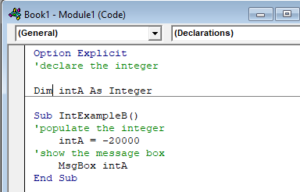 Global level variables are also declare at the top of code modules. However, instead of using the Dim statement, use the Public statement to indicate that the integer variable is available to be used throughout your VBA Project. 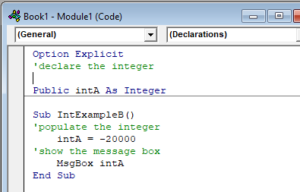 If you were to declare the integer at a module level and then try to use it in a different module, an error would occur. 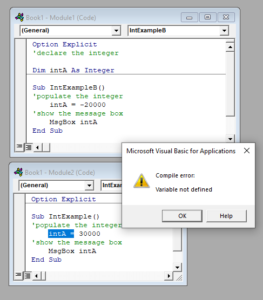 However, if you had used the Public keyword to declare the integer, the error would not occur and the procedure would run perfectly.

There might be an instance or instances when you will need to convert a number stored as a string to an integer value. 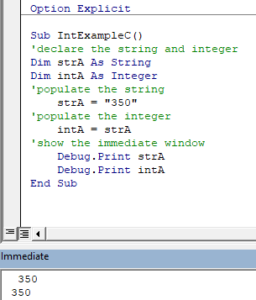 Conversely, you can convert an integer value to a string. 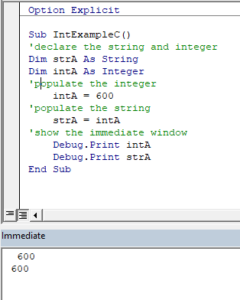 For further information about these data types, you can have a look here.

<<also talk about the Format function, to assign number formatting>>