To declare an Single variable, you use the Dim Statement (short for Dimension): 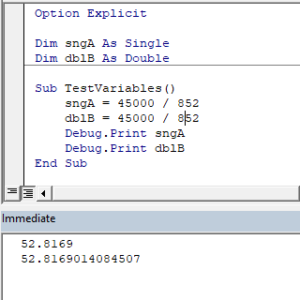 If you do not need a decimal place, you can use either the Int data type or the Long data type.

In the previous examples, we’ve declared the Single variable within a procedure. Variables declared with a procedure can only be used within that procedure. 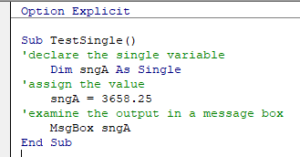 Instead, you can declare Single variables at the module or global level.

Global level variables are also declare at the top of code modules. However, instead of using the Dim statement, use the Public statement to indicate that the Single variable is available to be used throughout your VBA Project. 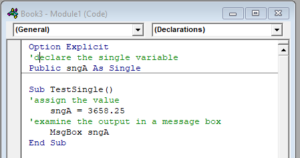 If you were to declare the Single variable at a module level and then try to use it in a different module, an error would occur. 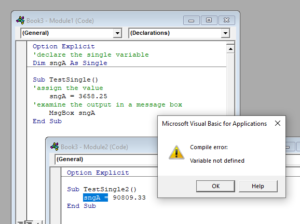 However, if you had used the Public keyword to declare the Single variable, the error would not occur and the procedure would run perfectly.

There may be a time where you wish to format a single data type to a string – for example you might want to display a currency symbol and round the number to 2 decimal places.

Similarly, you may want to display a number as a formatted phone number.