This tutorial will demonstrate how to use Regex in VBA.

Regex stands for regular expression. A regular expression is a pattern made up of a sequence of characters that you can use to find a matching pattern in another string. In order to use Regex in VBA you have to use the RegExp object.

A pattern such as [A-C] can be used to search for and match an upper case letter from A to C from a sequence. Regex patterns have their own syntax and can be built using a character or sequence of characters.

The following table shows the syntax which will allow you to build Regex patterns.

You can use quantifiers to specify how many times you want the pattern to match against the string.

Grouping or capturing allows you to use a pattern to capture and extract a portion of a string. So not only is the pattern matched, but the part of the string that matches the pattern is captured.

How to Use Regex in VBA

In order to use Regex in VBA, you first have to set the reference in the VBE editor. In the VBE editor, go to Tools > References > Microsoft VBScript Regular Expressions. 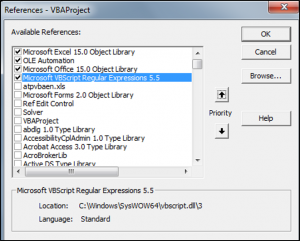 These are the properties of the RegExp object:

These are the methods of the RegExp object:

Testing a Pattern for a Match Against a String

You can use the Test method to check whether a pattern matches a sequence in the input string. The result is True if a match is found. The following code will show you how to test a pattern against a string:

Replacing a Pattern in a String

To replace only the number portion of the string used above, you would use the following code:

Matching and Displaying a Pattern in a String

Regex can take some time to learn, but it’s an extremely powerful tool for identifying/manipulating strings of text. It’s also broadly used across programming languages.