The String data type is one of the most common data types in VBA. It stores “strings” of text.

To declare an variable String variable, you use the Dim Statement (short for Dimension):

To assign a value to a variable, you use the equal sign:

There are actually 2 types of string variables – fixed and variable.

The “variable” string variable (shown in the previous example) allows your string to be any length. This is most common.

The “fixed” string variable defines the size of the string. A fixed string can hold up to 65,400 characters.

When you define a fixed variable, the number of characters in the variable is locked in place, even if you use fewer characters.

Notice the spaces in the graphic below – the variable has place holders for the rest of the characters in the string as ‘Fred Smith’ is less than 20 characters.

However, if you have declared a string without specifying the length, then the string will only hold as many characters as are passed to it. 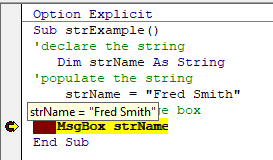 In the previous example, you declared the String variable within a procedure. Variables declared with a procedure can only be used within that procedure. 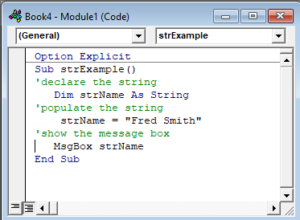 Instead, you can declare String variables at the module or global level. 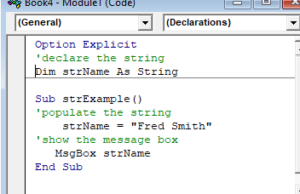 Global level variables are also declared at the top of code modules. However, instead of using the Dim statement, you use the Public statement to indicate that the string variable is available to be used throughout your VBA Project. 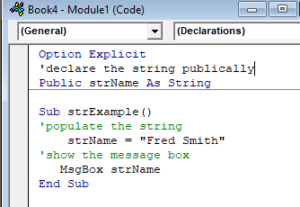 If  you declared the string variable at a module level and used in a different module, an error would occur. 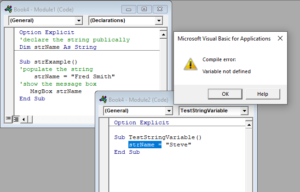 However, if you use the Public keyword to declare the string variable, the error would not occur and the procedure would run perfectly.

There may be a time when you have values in Excel that are stored as text – for example, you may have imported a CSV file which may have brought in text instead of numbers.

Note that the value in A1 is left-aligned, indicating a text value.

Once you run the code, the number will move to the right-indicating that it is now stored as a number.

This is particularly useful when you loop through a large range of cells.

Similarly, there might be values that you need to convert from a string to a value – for example, if you require a leading zero on a telephone number.

Note that you need to  begin the text string with an apostrophe (‘), before the zero in order to tell Excel to enter the value as string.