This tutorial will demonstrate how to use the SUMIFS Function to sum rows with data less than (or equal to) a specific value in Excel and Google Sheets.

Sum if Less Than 0

The SUMIFS Function sums data rows that meet certain criteria. Its syntax is:

This example will sum all Scores that are less than zero. 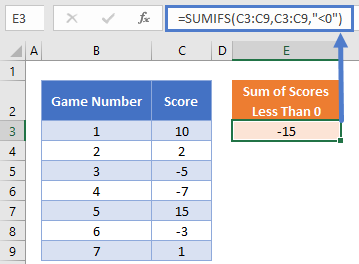 We include the criteria “<0” to sum all negative Scores. In this example, the criteria is also applied to the data in the Score column and so the cell range C3:C9 is used as both the sum range and the criteria range.

Sum if Less Than

This example sums the Revenue for all Order Numbers less than 527. 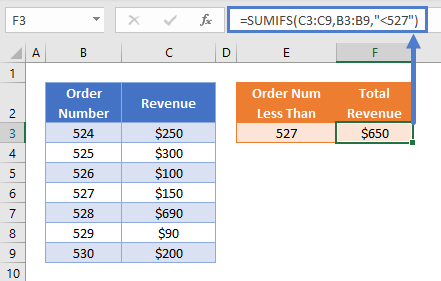 Sum if Less Than or Equal to

To include Revenue from Order Numbers which are less than or equal to 527, we can modify the formula to be:

Sum if Less Than – Cell References

Usually, it is bad practice to hard-code values into formulas. Instead, it is more flexible to use a separate cell to define the criteria’s value. 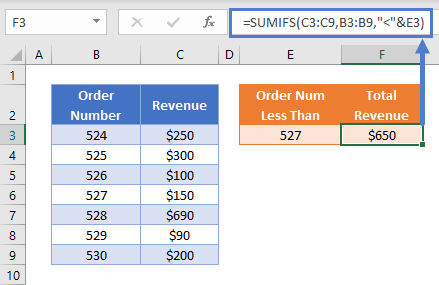 Now we add the logical operator within double quotes (“”) and use & to join the operator and the value:

Other logical operators can be used in this formula, such as:

To make our formulas easier to read, we’ve shown the formulas without locked cell references:

But these formulas will not work properly when copy and pasted elsewhere in your file. Instead, you should use locked cell references like this:

Read our article on Locking Cell References to learn more.

Sum if Less Than in Google Sheets