This tutorial will demonstrate how to use wildcards in VBA.

We use wildcards with the Like Operator which is an easier alternative to VBA Regex.

Using the Asterix (*) Wildcard in VBA

The Asterix wildcard replaces one or more characters in a VBA string.

Lets look at the following range of cells in Excel:

By using an Asterix wildcard in our VBA code, we can find all the Firstnames that begin with “M” and change the color of the text to red.

The result of running the code above is shown below. 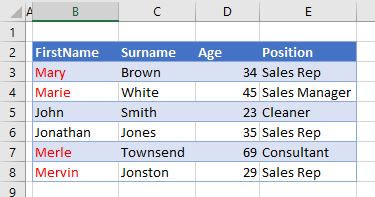 If we were to use the wildcard string “Ma*” – then only the first names in B3 and B4 would change.

The question mark will replace a single character in a VBA string. 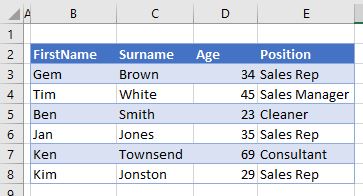 We can use the wildcard string “?im” to find any first names that end in “im”

The result of running this code is shown below: 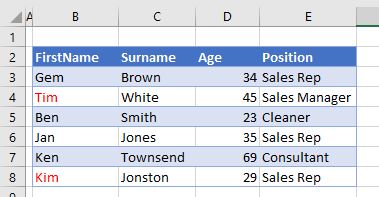 The example above can be modified slightly to allow us to use the question mark, in addition to a character list of allowed characters.  The wildcard string can therefore be amended to “?[e-i]m” where the first character can be anything, the second character has to be a character between e and i and the last letter has to be the character “m”.  Only 3 characters are allowed.

The result of this code would be: 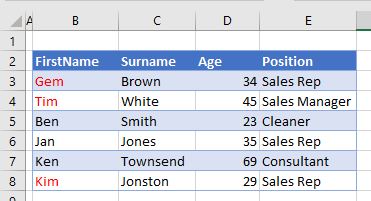 Using the hash (#) Wildcard in VBA

The hash (#) wildcard replaces a single digit in a VBA string.   We can match between 0 to 9.

The code above will loop through all the cells in the Range (“B3:E8”) and will change the color of the text in a cell to RED if a double-digit number is found in that cell. 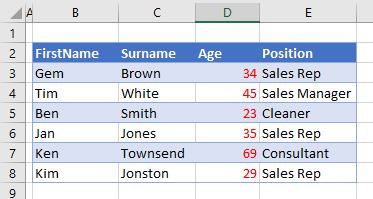 In the example below, the code will only change the number if the last number is a 9. 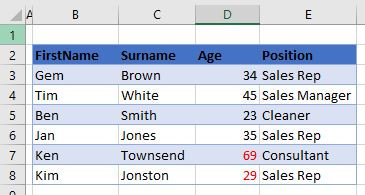