This tutorial will demonstrate how to debug XLOOKUP formulas in Excel. If your version of Excel does not support XLOOKUP, read how to use the VLOOKUP instead.

Therefore, in this tutorial, we won’t only learn how to diagnose XLOOKUP errors, but we’ll also understand more about its properties and criteria.

If the XLOOKUP Function fails to find a match, it will return the #N/A Error. Let’s diagnose the problem.

By default, the XLOOKUP Function looks for an exact match. If the item is not within the lookup array, then it will return the #N/A Error.

If the value truly does not exist, then the formula is working properly. We recommend adding an error handling so that if the value is not found, a different value is outputted instead of the #N/A error:

However, if the lookup value exists and the XLOOKUP Function can’t find it, here are some possible reasons:

3. #N/A – Numbers Stored as Text (and Other Data-type Mismatches)

One of the important criteria of XLOOKUP is that the data types of the lookup value and lookup array must be the same. If not, the XLOOKUP Function won’t be able to find a match.

The most common example of this is numbers stored as text.

One way to solve this is to use the Text to Columns Tool of Excel to convert numbers stored as text into numbers.

Here are the steps: 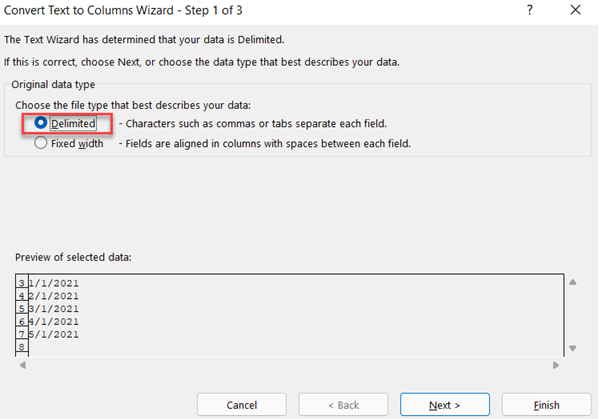 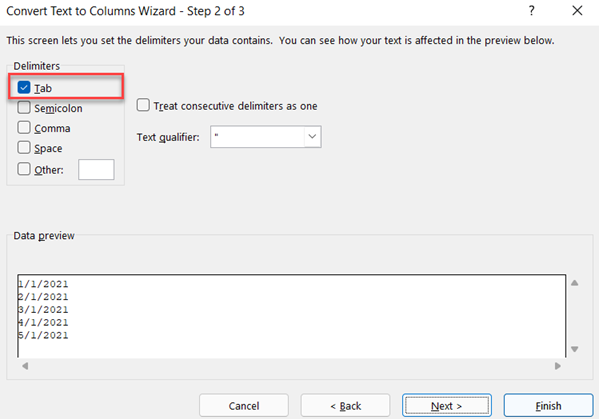 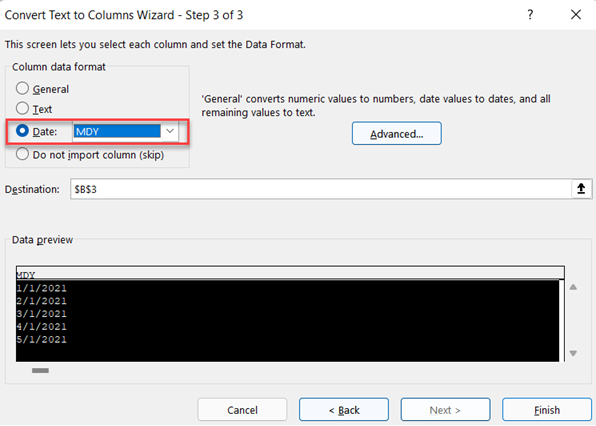 Text lookups are prone to errors due to extra spaces. In this example, the lookup value, “Sub  2,” contains two spaces, and therefore, it won’t match with “Sub 2” (one space) from the lookup array.

One way to solve this is by using the TRIM Function to remove the extra spaces. We can apply it to both the lookup value and the whole lookup array.

Note: The TRIM Function removes extra spaces between words until there’s a one space boundary between them, and any spaces before the first word and after the last word of a text or phrase are removed.

To solve the above problem, we need to sort the data either manually or through formulas:

We can also use the SORT Function and SORTBY Function to sort the lookup array (e.g., B3:B7) and return array (e.g., C3:C7), respectively.

Note: By default, both SORT and SORTBY functions sort an array in ascending order. The main difference between the two is that the SORT Function will always return all columns within an array while the SORTBY Function can return a specific column (e.g., C3:C7) from an array.

If an input doesn’t satisfy the criteria for performing XLOOKUP, the function won’t work and will instead return the #VALUE! Error.

A requirement of the XLOOKUP Function (for a typical vertical lookup) is that the row sizes of the lookup array and the return array must be the same.

The return array can be 2-dimensional and return multiple columns (or rows for a horizontal lookup). However, the number of rows (or columns) must match.

This property enables the XLOOKUP Function to return more than one column (or row for a horizontal lookup), but the consequence is that we can’t pair a 1D horizontal return array to a 1D vertical lookup array unlike the INDEX-MATCH Formula where we can do opposite orientations:

If you do this, the XLOOKUP will accept the return array as a 2D input with a row size not matching the row size of the lookup array. Therefore, it returns the #VALUE! Error.

To solve this, we can use the TRANSPOSE Function to transpose the orientation of one of the 1D arrays:

The 5th (match mode) and 6th (search mode) arguments of the XLOOKUP Function must have valid inputs. If not, then the XLOOKUP will return the #VALUE! Error.

The #NAME? Error is triggered by:

If there’s a typo in a function’s name, Excel will return the #NAME? Error.

The #NAME? Error can also be caused by an undefined named range in the formula. It’s either the named range doesn’t really exist or there’s a typo in the name.

Note: There are two named ranges in the above sheet: Subscription and Price. The typo in the Price named range results to a named range that doesn’t exist, and any text that is not enclosed with quotation marks is considered as a named range, which can also lead to the #NAME? Error.

There’s also a set of criteria when returning an array output, and if those criteria are not satisfied, the SPILL! Error is returned instead of the array output.

A dynamic array formula will not overwrite the values that are within its spill range. Instead, the array output will be blocked, and the #SPILL! Error is returned.

We can’t use Array XLOOKUP Formulas in Tables because they don’t support dynamic array formulas.

Instead you must use a non-array XLOOKUP Function where the lookup_value is a single value, not an array of values.

If the size of the output array from an XLOOKUP formula exceeds the sheet boundaries (row and column), the #SPILL! Is returned instead. (e.g, F3:F < whole column array)

There are XLOOKUP problems that don’t trigger errors because they don’t violate any of the criteria.

Even if the row sizes of the lookup array and return array are the same, if their positions do not match with each other, the XLOOKUP will return an incorrect result.

The lookup value in XLOOKUP can be a 1D or 2D array, which converts the XLOOKUP Function into a dynamic array that will Spill into adjacent cells.

If we drag an XLOOKUP Formula with relative references, then the references will also adjust relative to their position from the reference formula, which can lead to incorrect results.

If we want to copy or drag our XLOOKUP Formula to succeeding cells, we must convert the references for the lookup array and return array to absolute references. We can do this by adding the dollar symbol at the front of the column letter and row number or by pressing F4 while the cursor is in the reference within the formula.