This tutorial will demonstrate how to concatenate cell values based on criteria using the CONCAT Function in Excel and Google Sheets.

Users of Excel 2019+ have access to the CONCAT Function which is used to join multiple strings into a single string.

Users of Excel 2019 will need to enter this formula as an array function by pressing CTRL + SHIFT + ENTER. Users of later versions of Excel do not need to follow this step.

To explain what this formula is doing, lets break it down into steps:

First, Excel reads the range values into the formula:

Next the list of Team names is compared to the value Red:

The CONCAT Function then combines all of the array values into one text string:

If it is required to add delimiting values or text between each value, or for the function to ignore empty cell values, The TEXTJOIN Function can be used instead if you need to add delimiters

Read our TEXTJOIN If article to learn more.

As the CONCAT and TEXTJOIN Functions are not available before the Excel 2019 version, we need to solve this problem in a different way. The CONCATENATE Function is available but does not take ranges of cells as inputs or allow array operations and so we are required to use a helper column with an IF Function instead.

This next example shows how to use a helper column to create a text string of Player Names which relate to a Team value of Red: 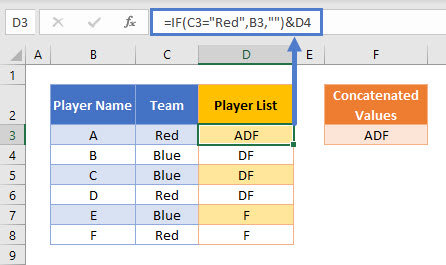 The first step in this example is to use an IF Function to replicate the condition of Team = Red: 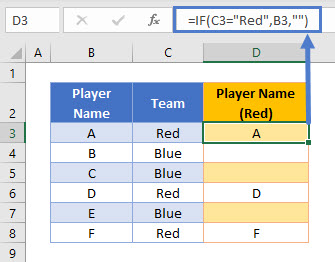 Next, we can create a column that builds up a list of these values into one cell by also referencing the cell below it: 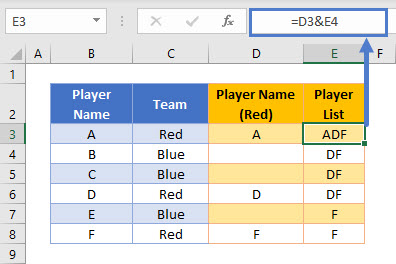 This formula uses the & character to join two values together. Note that the CONCATENATE Function could be used to create exactly the same result, but the & method is often preferred as it is shorter and makes it clearer what action the formula is performing.

These two helper columns can then be combined into one formula:

A summary cell can then reference the first value in the Player List helper column:

Concatenate If in Google Sheets

Google Sheets users should use the TEXTJOIN Function to concatenate values based on a condition.

As this formula requires array inputs for the cell ranges, the ARRAYFORMULA Function should be added to the formula by pressing CTRL + SHIFT + ENTER.