This tutorial demonstrates how to use the Excel CODE Function in Excel to get the numeric code representing a character.

The CODE Function Returns the numeric code for the first character in a cell containing text. This code refers to the character set on your computer.

To use the CODE Excel Worksheet Function, select a cell and type:

What Is the CODE Function?

A “character set” is a list of each character that your computer can display. This includes letters, numbers, special characters, and punctuation marks – as well as non-printable characters like line breaks.

Each character in the character is linked to a unique code. The Excel CODE function tells you what that code is for a given character.

How to Use the CODE Function

Use the Excel CODE Function as shown below:

Excel will return 65, which is the code associated with a capital “A”.

The Excel CHAR Function is the opposite of CODE – you tell CHAR a code, and it returns the associated character.

Will return a capital “A”.

A typical use of CODE is to return character codes so that they can be used in formulas with CHAR.

The CODE works exactly the same in Google Sheets as in Excel: 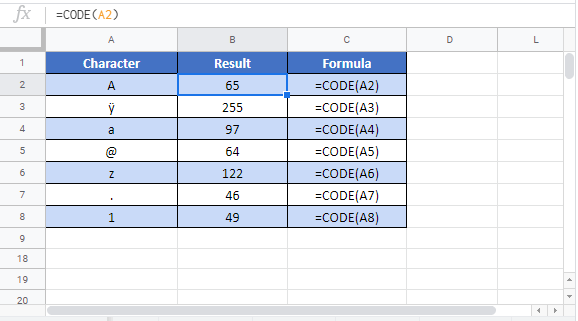