This Excel Tutorial demonstrates how to use the Excel Countif and Countifs Functions.

Counts all cells in a series that meet one (COUNTIF) or multiple (COUNTIFS) specified criteria.

range – An array of numbers, text, or blank values.
criteria – A string containing the criteria. Example “>0”

This code will count all cells that are greater than zero in column A.
=countif(a4:a10,">0")

Counting nonblank cells is a little trickier. You would think that this would count all the non-blank cells:
=countif(a4:a10,"<>")
and it usually does, except for one notable exception. When a cell contains a formula that results in “” (Blank), the above code will count it as non-blank because a formula exists in the cell. Instead, use this formula:
=countif(a4:a10,"*?")
This formula makes use of Wildcard Characters. We’ll learn about them below.

There is one other count function you should know: the COUNTA Function. The COUNTA Function counts all cells that contain anything: a formula (even if it results in “”), a logical value (TRUE or FALSE), text, or a number.

You may have heard about Wildcards in Excel. Wildcards are characters that can represent any character. Here’s a chart:
<>

Countif – Does not Contain any Text

Unfortunately there is not an easy way to count cells with specific colors. To do this you will need to use VBA. Here’s a link with more information: CountIf Cell Color using VBA>.

There are numerous ways to count duplicates, but let’s take a look at one of the easier methods, using only COUNTIF functions.

First, create a column to count how often a record appears on the data. Any record appearing more than once (>1) is considered a duplicate.
=count

Then we create a COUNTIF function to count the number of records that appear more than once:
=count

Countif with Two or Multiple Conditions – The Countifs Function

COUNTIFS – Greater Than and Less Than

Let’s do a COUNTIF where we check if a number falls within a range. The number must be greater than 0, but less than 100:

So far we’ve only dealt with AND criteria. Ex: Greater than 0 AND less than 100. What doing a COUNTIFS with OR?

How to do a Countif in Excel
Criteria for Countif

You can also access the Excel COUNTIF Function from within VBA, using Application.WorksheetFunction.

Assuming we have the data displayed above:

Will return 4 , as there are four cells with values larger that 60

Will return 1 , as there is one cell with value equal to 10

Will return 10 , as all cells have values

Will return 10 , as there are no blank cells 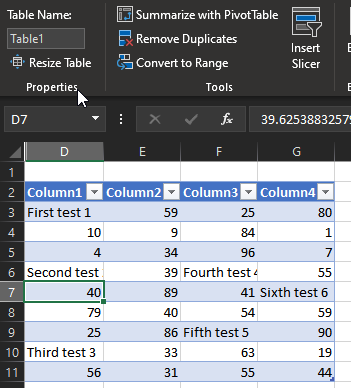 Assuming we have the data in a table named “Table1”, like displayed above:

Will return 6, as there are six cells that contain the word “test”.

Will return 6, as there are no cells that contain ONLY the word “test”.

Will return 6, as there are three cells whose values start with the letter “F”.

How to use the COUNTIF Function for Excel:

For more information about the COUNTIF Function visit the Microsoft COUNTIF help page.

Before we talk about how to use the countif function, we should mention these 3 other functions
count
counta
countblanks