This tutorial demonstrates how to use the Excel FV Function in Excel to calculate the future value of an investment.

To use the FV Excel Worksheet Function, select a cell and type:

pmt – It’s the payment per period. Usually, it can be the principal amount and interest but doesn’t include taxes or other fees. For example, the monthly payments of five years of housing loan of $20,000 at an interest rate of 9% are $415.17. The PV argument must be provided in case pmt is omitted from the formula.

pv – OPTIONAL: It’s the present value of the investment or the amount that the future payments are worth now. If the PV argument is omitted, it’s assumed to be zero (0). The pmt argument must be provided in case PV is omitted.

What Is Future Value?

It’s the value of the investment at a particular date in the future that is equivalent in value to a specified sum today.

The Future Value is calculated in two ways:

What Is Excel FV Function?

FV is used to determine how much the investment will be worth at the end of the given period if there are regular and constant deposits at constant interest rates.

Suppose, we deposited $1,000 for 4 years into a savings account. The interest we get from this was 8% annually, which was compounded monthly and with no additional payments.

The annual interest rate is converted into monthly interest as

No regular payments are being made, so the value of pmt argument is

And the type of the payments isn’t mentioned in the example, so the [type] argument is simply omitted or have default value i.e.

The Future Value of the investment is

Let’s take a look at another example, where $10,000 has been invested at 10% compounded monthly for 4 years. And on top of the initial deposit, an additional amount of $500 are planned to be invested each month for the next four years. So the future value of the total savings would be calculated with the help of excel FV Formula.

As the payments are made monthly, the annual interest rate is converted into monthly interest by

And the type of the payments isn’t mentioned in the example, so the [type] argument is simply omitted or have default value i.e.

So, the accumulated amount at the end of the 4th year would be

All of the above examples work exactly the same in Google Sheets as in Excel. 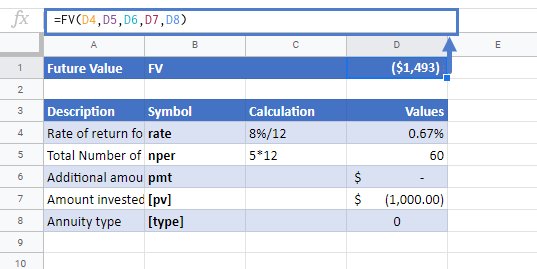 Use the FV Function to calculate the Future Value of an investment.
Investopedia defines future value as: The value of an asset or cash at a specified date in the future that is equivalent to a specified sum today.

Make sure the units of nper and rate are consistent, i.e. in case of monthly interest rate the number of periods of investment should also be in months.

You can also use the FV function in VBA. Type:
application.worksheetfunction.fv(rate,nper,pmt,pv,type)
For the function arguments (rate, etc.), you can either enter them directly into the function or define variables to use instead.