This tutorial demonstrates how to use the Excel LEN Function in Excel to count the number of characters.

The LEN Function Counts number of characters in a text string.

To use the LEN Excel Worksheet Function, select a cell and type:

What Is the LEN Function?

The Excel LEN Function, short for “length”, tells you the number of characters in a given text string.

Although it is mainly used for string (text) data, you can also use it on numerical data – but as we’ll see, there are a few things you need to keep in mind.

How to Use the LEN Function

To use the Excel LEN Function, type the following, putting any text string, cell reference, or formula between the parentheses:

Let’s take a look at some examples: 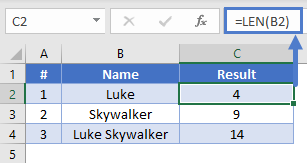 In example #1, we’ve asked LEN how many characters are in cell B2, which contains “Luke” – so Excel returns 4.

How to combine LEN function

If you want to return the total number of characters in two cells, you have a couple of options. You can either concatenate the two cells using an ampersand (“&”) as in example #1, or you can use LEN on both cells and sum the results, as in example #2.

Important note: LEN counts spaces as characters. Look at example #3 – in this case, LEN returns 14 because it’s also counting the space between “Luke” and “Skywalker”.

The Excel LEN Function is designed to return the number of characters in a text string. If you pass a number, LEN first converts it to a string, and then returns its length. 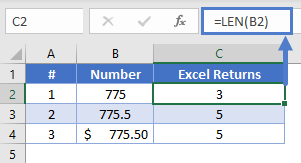 As you can see, LEN counts decimal points, and if you format a cell to a currency, the currency symbol is not counted.

Note also that even though currency formatting displays numbers to two decimal places, LEN does not count trailing zeros.

Have a look at the following examples:

Cells B2 and B3 both contain the same figure: 3.33333. So why does LEN return different values for each?

With formatted cells, LEN returns the actual value of the cell, regardless of the number of decimal places you’ve chosen to display.

But why 16? That’s because Excel can store a maximum of 15 numbers in a cell, and will clip longer numbers once they reach this limit. So LEN returns 16: 15 numbers, plus the decimal point.

Excel stores dates as numbers, represented as the number of days since January 0, 1900. 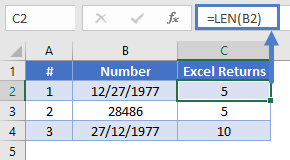 Examples #1 and #2 are equivalent, it’s just that B2 is formatted as a date, and B3 as a number. So LEN returns 5 either way.

You can combine LEN with some of the Excel functions in some useful ways.

The LEFT Excel Function returns a given number of characters from the beginning of a string.

Check out the example below: 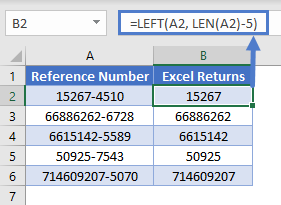 Here we have a series of reference numbers with a four-digit area code on the end. We’ve used LEN with LEFT to take the strings in column A, and return a number of characters equal to the length of the string, minus 5, which will get rid of the four digits and the hyphen.

Sometimes our cells might contain spaces before and after the actual data itself. This is common when data is manually entered, and sometimes people accidentally pick up a space when copying and pasting data.

This can throw off our LEN function results, but we can solve that problem by combining LEN with TRIM, like so:

TRIM removes any trailing or leading spaces from a string. In the example below, each sentence has spaces either before or after the text. Note the different results between LEN and LEN with TRIM.

Using LEN with SUBSTITUTE to Avoid Counting a Given Character

If you want to count the number of characters in a string, but you don’t want Excel to count a particular character, you can do this by combining LEN with SUBSTITUTE.

With SUBSTITUTE, you can take a string, and swap any character or substring within it for anything else. We can use SUBSTITUTE to replace the character we don’t want to count with nothing, effectively removing it.

So, imagine we have a list of names, and we want to know the number of characters in each name. However, the first and last names are stored in the same cell, and we don’t want to count the space between them.

We could combine LEN with SUBSTITUTE as follows: 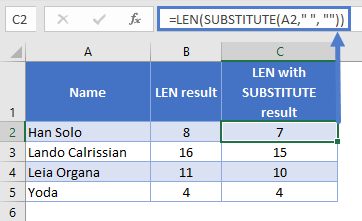 Note that as the fourth example has no spaces, both formulas produce the same result.

Find Nth word in the String

We could combine TRIM, MID, SUBSTITUTE, REPT  with LEN as follows to get last word of the string.

Extract number from the Left/Right of a string

Extract number from the Left

We could combine LEFT, SUM, SUBSTITUTE with LEN as follows:

Extract number from the Right

We could combine RIGHT, MIN, FIND with LEN as follows:

LEN with  REPT to add leading ZEROS to number

Add leading ZEROS is very useful when you working with excel. In this example we will explain how you can do this by combining LEN with REPT. 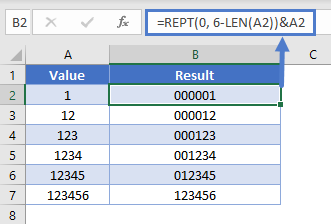 In above example we explain add leading zeros only till 5 digits, but based on the requirement you can change number 6 to get required out put. you can refer below example to get leading zero up to 10 digits.

Below table help you give more ways for add leading zeros to set number.

The LEN Function works exactly the same in Google Sheets as in Excel:

The LEN Function is very useful when working with other text functions. Such as Left, Right, or Mid.

And finally, one of the more useful roles the LEN function can serve is validating a range that needs to be a specific length.

In this example a user needs to input 5 digit Zipcodes in range A2:A10. You will notice in the picture that every time a user inputs cell content that does not equal 5 characters the cell color changes, making it very easy to audit.

This is achieved by using the LEN function with conditional formatting, here’s how:

1. Select the Range or cell to apply Conditional Formatting to
2. Select Format on the Main Menu
3. Select Conditional Formatting
4. In the dropdown change Cell value is to Formula is
5. Enter =LEN(A2:A10)<>5
6. Click the Format… button and choose the format to apply if the condition is met. I changed the Pattern or background color
7. Click OK, OK

Here’s a snippet of my Conditional Formatting window using LEN

You can also use the LEN function in VBA. Type:
application.worksheetfunction.len(text)
For the function arguments (text, etc.), you can either enter them directly into the function, or define variables to use instead.