VBA Runtime Errors are errors that occur during code execution. Examples of runtime errors include:

When an error occurs with On Error GoTo 0, VBA will stop executing code and display its standard error message box.

Often you will add an On Error GoTo 0 after adding On Error Resume Next error handling (next section):

On Error Resume Next

On Error Resume Next tells VBA to skip any lines of code containing errors and proceed to the next line.

Notice we added On Error GoTo 0 after the line of code containing the potential error. This resets the error handling.

In the next section we’ll show you how to test if an error occurred using Err.Number, giving you more advanced error handling options.

Instead of simply skipping over a line containing an error, we can catch the error by using On Error Resume Next and Err.Number.

Err.Number returns an error number corresponding with the type of error detected. If there is no error, Err.Number = 0.

For example, this procedure will return “11” because the error that occurs is Run-time error ’11’. 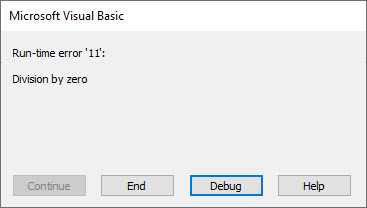 The true power of Err.Number lies in the ability to detect if an error occurred (Err.Number <> 0).  In the example below, we’ve created a function that will test if a sheet exists by using Err.Number.

Note: We’ve added a On Error GoTo -1 to the end which resets Err.Number to 0 (see two sections down).

With On Error Resume Next and Err.Number, you can replicate the “Try” & “Catch” functionality of other programming languages.

On Error GoTo Line tells VBA to “go to” a labeled line of code when an error is encountered.  You declare the Go To statement like this (where errHandler is the line label to go to):

Note: This is the same label that you’d use with a regular VBA GoTo Statement.

Below we will demonstrate using On Error GoTo Line to Exit a procedure.

You can use On Error GoTo Line to exit a sub when an error occurs.

You can do this by placing the error handler line label at the end of your procedure:

or by using the Exit Sub command:

After an error is handled, you should generally clear the error to prevent future issues with error handling.

After an error occurs, both Err.Clear and On Error GoTo -1 can be used to reset Err.Number to 0. But there is one very important difference: Err.Clear does not reset the actual error itself, it only resets the Err.Number.

What does that mean?  Using Err.Clear, you will not be able to change the error handling setting. To see the difference, test out this code and replace On Error GoTo -1 with Err.Clear:

Typically, I recommend always using On Error GoTo -1, unless you have a good reason to use Err.Clear instead.

You might also want to display a Message Box on error.  This example will display different message boxes depending on where the error occurs:

Here you would replace Err.Raise(11) with your actual code.

Another way to handle errors is to test for them with the VBA ISERROR Function. The ISERROR Function tests an expression for errors, returning TRUE or FALSE if an error occurs.

VBA Runtime Errors are errors that occur during code execution. Examples of runtime errors include:

You can “error handle” runtime errors using the methods discussed above.

VBA Syntax Errors are errors with code writing. Examples of syntax errors include:

The VBA Editor identifies many syntax errors with red highlighting: 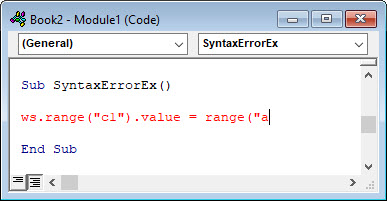 The VBA Editor also has an option to “Auto Syntax Check”: 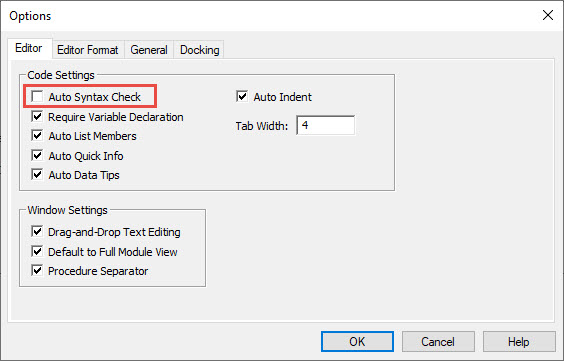 When this is checked, the VBA Editor will generate a message box alerting you syntax errors after you enter a line of code: 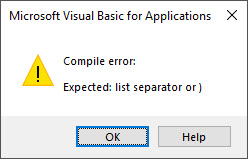 I personally find this extremely annoying and disable the feature.

Before attempting to run a procedure, VBA will “compile” the procedure. Compiling transforms the program from source code (that you can see) into executable form (you can’t see).

VBA Compile Errors are errors that prevent the code from compiling.

A good example of a compile error is a missing variable declaration: 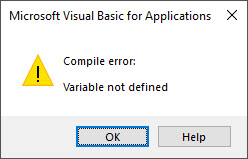 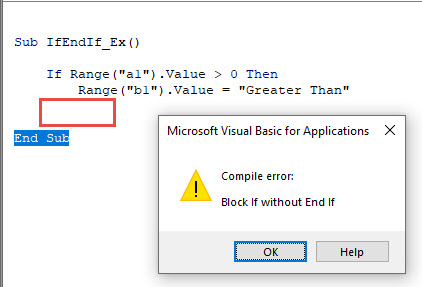 Syntax Errors (previous section) are a subset of Compile Errors.

Compile errors will appear when you attempt to run a Procedure. But ideally, you would identify compile errors prior to attempting to run the procedure.

You can do this by compiling the project ahead of time. To do so, go to Debug > Compile VBA Project. 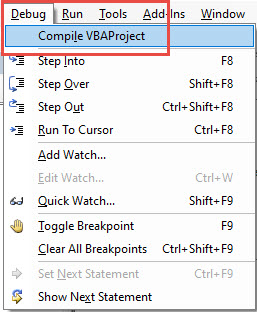 The compiler will “go to” the first error. Once you fix that error, compile the project again. Repeat until all errors are fixed.

You can tell that all errors are fixed because Compile VBA Project will be grayed out: 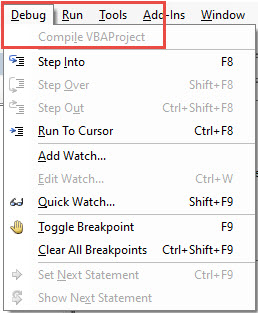 The VBA OverFlow Error occurs when you attempt to put a value into a variable that is too large. For example, Integer Variables can only contain values between -32,768 to 32,768. If you enter a larger value, you’ll receive an Overflow error: 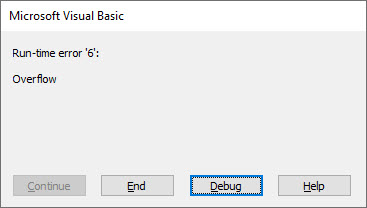 Instead, you should use the Long Variable to store the larger number.

Unlike other programming languages, In VBA there is no Catch Statement. However, you can replicate a Catch Statement by using On Error Resume Next and If Err.Number <> 0 Then. This is covered above in Error Handling with Err.Number.

To ignore errors in VBA, simply use the On Error Resume Next statement:

However, as mentioned above, you should be careful using this statement as it doesn’t fix an error, it just simply ignores the line of code containing the error.

To through an error in VBA, you use the Err.Raise method.

This line of code will raise Run-time error ’13’: Type mismatch:

When you click ‘Debug’, you’ll see the line of code that is throwing the error:

VBA Error Handling in a Loop

The best way to error handle within a Loop is by using On Error Resume Next along with Err.Number to detect if an error has occurred (Remember to use Err.Clear to clear the error after each occurrence).

The example below will divide two numbers (Column A by Column B) and output the result into Column C. If there’s an error, the result will be 0.