This tutorial will demonstrate how to add commas in Excel and Google Sheets.

We can add a single comma in Excel and Google Sheets by surrounding the comma with quotations (to tell Excel the comma is a string of text) and by using the ampersand operator (&) to merge comma together with the cell values. 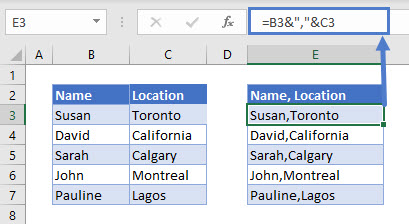 In this example we’ve merged two cells together, separating the cell values with a comma. We use the ampersand operator (“&”) to join the text strings together.

Commas can also be added to lists in Excel and Google Sheets with the use of the TEXTJOIN Function. 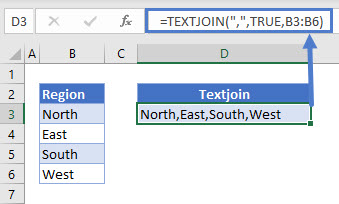 The TEXTJOIN Function simply combines a range of cells together, separated by a delimiter (in our case a comma).

In the example above, within the TEXTJOIN Function we first indicate the comma as the delimiter required, next we choose to ignore blank cells by selecting “TRUE” and then we select the list range that needs to be combined (“B3:B6”).

The TEXTJOIN Function was introduced in Excel 2019.

Commas can also be replace to Space (” “) in Excel and Google Sheets with the use of the SUBSTITUTE Function.

The SUBSTITUTE Function simply replace the our set Character, In this example we are showing how to replace Space (” “) by commas, But based on the available character we change function accordingly.

Please look below example which we can replace dash (-) by commas.

In versions of Excel prior to 2019, you can accomplish the same thing by creating a running list. 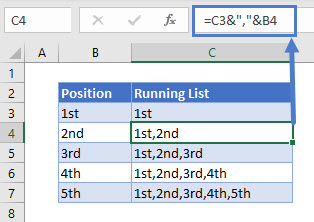 In the example above, we created a running list based on the contents in column B.

What the formula does is, it creates a list that keeps building for each row. Using the ampersand operator, the cell above is joined to the cell on the left (the cell in column B on the same row with the formula cell), this is then separated with a comma.