This tutorial will demonstrate how to determine the most frequently occurring number in a range in Excel and Google Sheets.

We can calculate the most frequent number in a range by using the MODE Function. 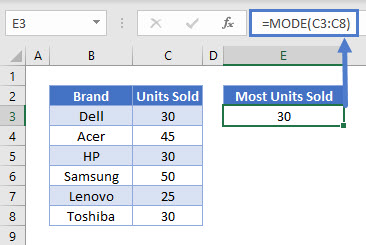 In the example above, the MODE Function selected the number that occurred the most within the specified range, which is 30.

Note: The MODE Function has been “replaced” with the MODE.SNGL Function. However, the MODE Function is still available for backwards compatibility. The Functions work exactly the same.

What happens if you have more than one number that occurs the most number of times? The MODE Function will simply pick which result to show, ignoring the others. Instead, you can use the MODE.MULT Function to output all of the most frequently occurring numbers. 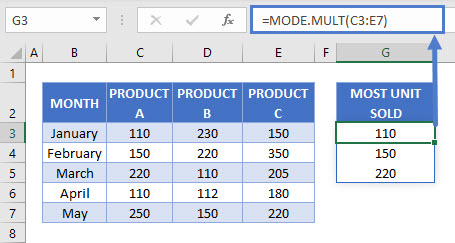 The MODE.MULT Function does what its name implies, it shows the multiple numbers with the highest number of occurrences.