This tutorial will demonstrate how to extract the first word from a cell in Excel & Google Sheets.

Extract First Word From a Text

To extract the first word from a cell, we can use a formula containing the LEFT and FIND functions.

Let’s delve into the more details of the functions used in the above formula.

We used the FIND function to get the position of the first occurrence of space in the text.

In case the cell has only one word, the formula will return #VALUE error.

So to prevent the formula to return the error we can use the following two options using:

We can solve this issue by using the IFERROR function before our formula, like this: 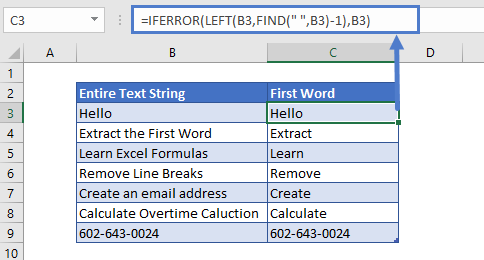 The IFERROR function, when finds an error will return the original text value – which could be the one word or an empty cell.

There’s also a smart and simpler way to handle the #VALUE error. It is to add additional space to the second argument of the FIND function, with ampersand operator, like this:

Now the FIND function will always find a space because we’ve appended a space to the end of each string of text.

Extracting the last word from a string of text is more complicated. One option is to use a formula like this:

The formula to extract the first word from a text works exactly the same in Google Sheets as in Excel: