This tutorial demonstrates how to use the Excel LINEST Function in Excel to calculate statistics about a trendline.

To use the LINEST Excel Worksheet Function, select a cell and type:

const – OPTIONAL. Logical value indicating whether to calculate B (the intercept in y = mx + b) using the least squares method (TRUE Or Ommitted) or to manually set B = 0 (FALSE).

The LINEST function in Excel is a function used to generate regression statistics for a linear regression model. LINEST is an array formula and can be used alone, or with other functions to calculate specific statistics about the model.

LINEST is like FORECAST in that it achieves a similar outcome, but with far more information about your regression model as well as the option to fit more than one independent variable.

I want to know what the regression equation of the above data is. Using LINEST:

The y-intercept value here is equivalent to 0, in scientific notation.

The equation of the line is y= 2x + 0 . Note that LINEST returns both the slope and intercept of the line. To return both values, the formula must be entered as an array formula. More on array formulas later.

How to use LINEST

When the stats option is set to TRUE, the organization of the regression statistics are as follows:

You may be wondering what each variable means.

The main statistics to understand are the slope coefficients, y-intercept and the coefficient of determination or the r2 value of the model.

Using the above example and selecting TRUE for the stats parameter:

In releases following January 2020 of Excel in Microsoft 365 (previously Office 365), dynamic arrays have changed the way array formulas are evaluated. It is no longer required to use CTRL + SHIFT + ENTER or highlight the area of cells the array will take up. Simply enter the formula and click enter and the resultant cells will “spill out” into the array.

For the remainder of this article we will reference using LINEST with respect to dynamic arrays in Microsoft 365 Excel.

Combining the LINEST and SUM functions can be used to predict the value of a dependent variable y, given known x and y data. Below is an example showing what the y value will be when x=14. 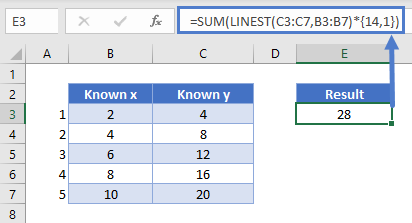 The model comes in the form y =mx + b . This is the same as y = a+ bx, just a different way to represent the equation. A tip to keep in mind for linear equations is the variable next to x is always the slope, and the variable following a plus or minus sign is always the intercept, regardless of the letters used in the equation.

In some cases, there is more than one independent variable which should be considered when creating a linear regression model. This is called multiple linear regression (i.e. multiple independent variables). If I want to estimate the cost of an office building, things like floor space, number of building entrances, age of building and the number of offices would all be part of the equation. Let’s see an example.

Typing the LINEST formula into cell G29 and executing it, we get:

The model comes in the form:

Remember that the LINEST result array is in reverse order from the equation. In the above example, 52,317.8 is our intercept, b, and 27.6 is our m1 or the slope value for the Floor space variable, x1.

Using the LINEST function with the data provided, our regression model is:

With an r2 value of 0.997, which indicates a strong or highly correlated model. Using the model, you can now predict what the assessed value of an office building will be based on any combination of the above independent variables.

See our other articles on Forecasting with Exponential Smoothing, TREND, GROWTH and LOGEST functions.

The LINEST function works exactly the same in Google Sheets as in Excel. 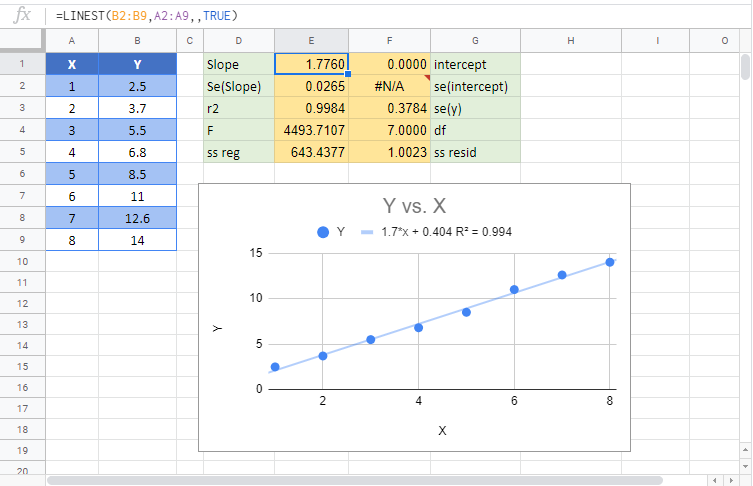 You can also use the LINEST function in VBA. Type: 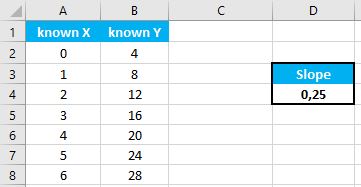 For the function arguments (known_y’s, etc.), you can either enter them directly into the function, or define variables to use instead.