This tutorial demonstrates how to use the Excel MEDIAN Function in Excel to calculate the median number.

To use the MEDIAN Excel Worksheet Function, select a cell and type:

number1 – A number or cell reference that refers to numeric values.

What is the Median?

In statistical analysis, the median is the middle data point in a series of data. It reflects the central tendency in a group data. If you have 7 numbers, the median number would be the 4th largest number.

Let’s look at an example of student test scores. There are 7 students, so the median score is the 4th best score (Pam’s) 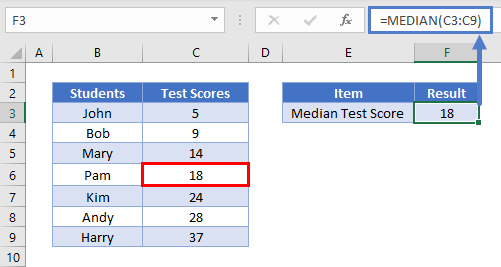 A good rule of thumb is if you have outlier data, then the median will be more representative of the data than the mean (average).

What is outlier data?

Outlier data are extreme data points that distort the value of the mean. Mean is very sensitive to outlier data hence the distortion.

For example, you want to find out the median cost of five different laptops. 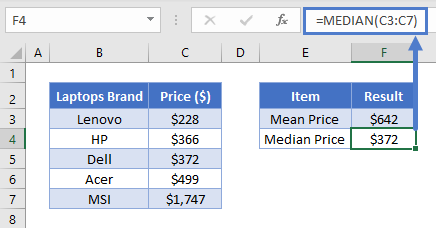 You will notice that mean & median values are not close. It is because of the outlier data point: $1747. In this case, the median value might be more representative of laptop prices because the mean is so heavily weighted by the outlier price.

How to use the MEDIAN Function

To use the Excel MEDIAN Function, simply enter your desired data range into the function:

Notice how with an odd number of data points the MEDIAN Function returns the middle number?

Now look at how the MEDIAN Function averages the middle numbers when there is an even number of data points:

Empty Cells or Cells With Text

The MEDIAN Function ignores cells that are empty or that contain non-numerical values. 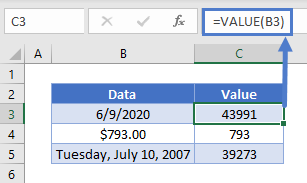 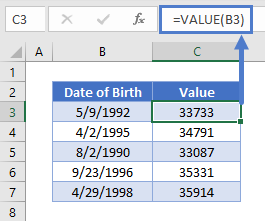 This makes it easy to calculate the median date.

Using this knowledge, we can also calculate the median age.

First, we will calculate the median date of birth.

Next, we will use the YEARFRAC Function to calculate the median age:

So far we’ve been calculating the median of all numbers in a range; this is how the MEDIAN Function works.

But what if you want to calculate the median of only a subset of data?

Excel has an AVERAGEIFS Function that allows you to take the average of a subset of numbers that meet a certain condition. Average of HP laptops that were released in 2017 can be easily calculated using the AVERAGEIF function.

However, Excel doesn’t have a corresponding “median if” function. You can create your own “median if” with an Array formula containing the MEDIAN and IF Functions.

This is the generic formula to calculate “median if

Excel 2019 and Earlier: After entering the formula, instead of pressing ENTER, you must press CTRL + SHIFT + ENTER. This turns the formula into an array. You can identify arrays by the curly brackets surrounding the formula

Important: You can not manually type in the curly brackets, this will not work. You must use CTRL + SHIFT + ENTER

Excel 365 and Newer Versions of Excel: After the release of Excel 2019, Microsoft changed how array formulas work. Now, you no longer need to use CTRL + SHIFT + ENTER. You can simply enter the formula like normal.

Returning to our example, we will use the following formula:

Excel will look for 2017 in “Release Year” range and return only those values to the MEDIAN function. Hence, calculating only the median of a subset of our data.

Note: The above formula uses absolute references (the $ signs) to lock cell references when copying formulas. If you aren’t familiar with this, please read our Excel References Guide.

The MEDIAN function works exactly the same in Google Sheets as in Excel:

You can also use the MEDIAN function in VBA. Type:
application.worksheetfunction.median(number1,number2) 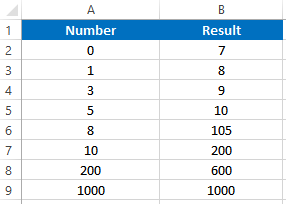 For the function arguments (array, etc.), you can either enter them directly into the function, or define variables to use instead.