This Tutorial demonstrates how to use the Excel PERCENTILE Function in Excel to calculate the percentile.

To use the PERCENTILE Excel Worksheet Function, select a cell and type:

k – The percentile value in between 0 and 1.

What Is the PERCENTILE Function?

PERCENTILE is one of Excel’s statistical functions. It returns the k-th percentile of a given range of data.

PERCENTILE Is a “Compatibility” Function

PERCENTILE still works, so older spreadsheets using it will continue to function as normal. However, if you don’t need your spreadsheet to remain compatible with older versions of Excel, you should use PERCENTILE.INC or PERCENTILE.EXC.

We’ll discuss all three so that you understand the ins-and-outs of each one.

What Is the Percentile?

When you’re dealing with percentiles, note that the 50th percentile is equal to the median <<link>> of the data.

The Excel PERCENTILE Function tells you what the cut off point for a given percentile is – which is to say, how high a value needs to be in order to be in the k-th percentile.

How to Use the PERCENTILE Function 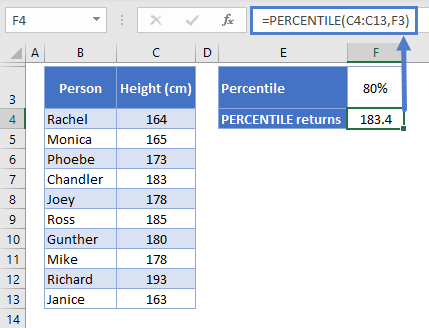 Here we have a few friends who have decided to calculate the 80th percentile of the height of their group, and we see the result – 183.4cm.

The first argument in the function is the range of data – their heights, which we have laid out in C4:C13.

However, you can put the percentile directly into the formula if you want. You can define it as a decimal, like this:

And these all return the same value.

A few things to be aware of with PERCENTILE:

Let’s put our data in order for a second: 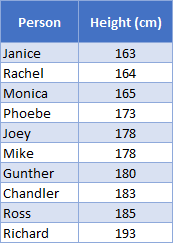 You might wonder why the 80th percentile isn’t 183, since Chandler is the 8th tallest person in the group.

Well, there are actually many ways to calculate the percentile mathematically, and no standardized or preferred method for all situations. This is something statisticians argue over in academic papers.

Excel gives you two ways of doing this, which brings us to PERCENTILE.INC and PERCENTILE.EXC.

The Excel PERCENTILE.INC Function is the same as PERCENTILE. The “INC” part is short for inclusive, because it can calculate any valid percentile (that is, anything from 0% to 100%). 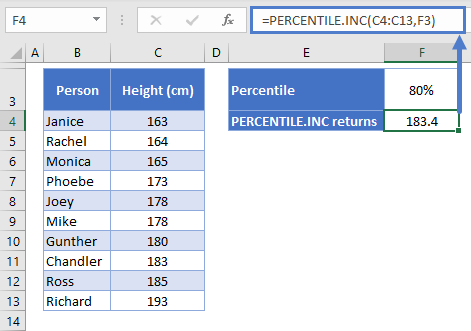 As you can see, it returns the same result that PERCENTILE did earlier.

So, going back to why the 80th percentile isn’t exactly equal to Chandler’s height. Remember, we’re doing an inclusive calculation here, so we’re including all k values from 0 to 1 (or 0% to 100%).

This means that our shortest friend, Janice, is at the 0th percentile, and Richard, the tallest, is the 100th percentile. All the other friends are at equal increments between the two, and that increment is equal to 1/(n-1), where n is the number of data points in the range.

In our case, that’s:

That means Chandler is not actually at the 80th percentile, he’s at the 77.777th percentile. If we plug that number into PERCENTILE.INC, we should get Chandler’s height… 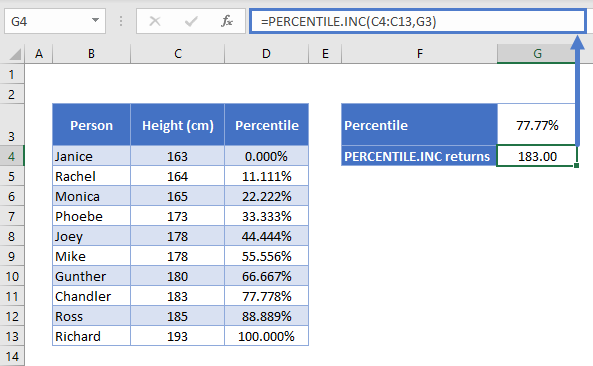 Now, whenever the k value you specify is not a multiple of 1/(n-1), PERCENTILE.INC will apply a process called linear interpolation to calculate the result. This sounds complicated, but it basically means Excel will settle on a value between the two.

So why did we get 183.4 when we asked for the 80th percentile earlier?

The calculation works as follows:

You use PERCENTILE.EXC in essentially the same way: 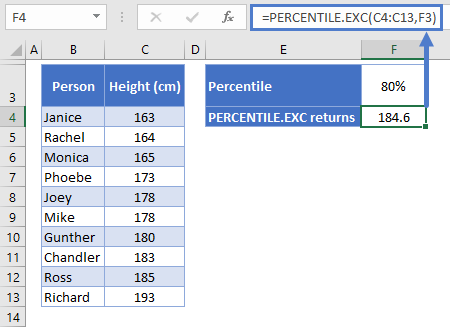 Okay, so we’ve got the same data, we want the same percentile, but we got different results. Why is that?

It’s because PERCENTILE.EXC excludes the first and last values when calculating its percentile intervals. See below: 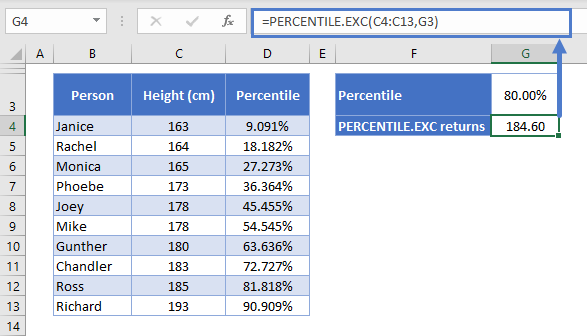 Everything else works the same way as with PERCENTILE.INC. Again, the 80th percentile is between Chandler and Ross, so Excel applies the same method of linear interpolation:

The PERCENTILE Function works exactly the same in Google Sheets as in Excel:

You can also use the PERCENTILE function in VBA. Type:
application.worksheetfunction.percentile(array,k)
For the function arguments (array, etc.), you can either enter them directly into the function, or define variables to use instead.