This Tutorial demonstrates how to use the Excel RAND Function in Excel to calculate a random number.

The RAND Function Calculates a random number between 0 and 1.

To use the RAND Excel Worksheet Function, select a cell and type:

How to use the RAND Function in Excel:

The RAND function generates numbers (decimals) greater than 0 and lesser than 1. 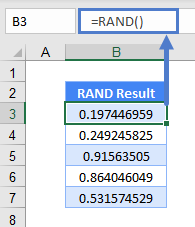 Besides generating random numbers greater than 0 and lesser than 1, RANDARRAY allows you to choose how many rows and columns to place the random numbers, choose the minimum and maximum number instead of just 0 and 1, and even choose if you want whole numbers or decimals.

If you have Excel 2007 onwards, you can use RANDBETWEEN as well. Like RANDARRAY, it allows you to choose the minimum and maximum number instead of just 0 and 1. This example below shows random numbers between 1 and 100. 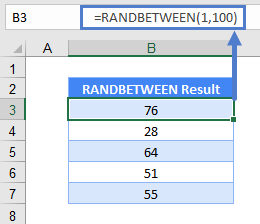 Generate Whole Numbers within a Range

As mentioned, RANDARRAY and RANDBETWEEN do this easily. With RAND, you need to do it like this: 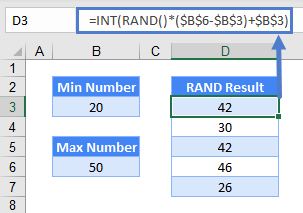 If you know how dates and time are stored in Excel, the logic is going to be the same as above because they are stored as numbers. Just: 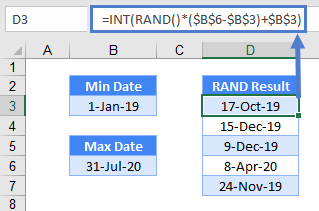 Time is similar, except that it’s decimal instead of a whole number or integer. Hence, remove the INT: 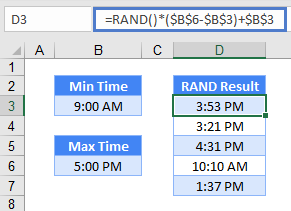 To have them both together, simply add them together:

RAND function will randomize numbers in C3:C7. RANK compares the random number in cell C3 among C3:C7 and ranks the number in descending order. 0.0843531593276469 for instance, ranks as number 3 among C3:C7. INDEX grabs the particular row number 3 from B3:B7 and that’s Sebastian Thompson.

Do note that while it’s extremely unlikely for RAND function to generate a duplicate number, it’s still theoretically possible.

Retrieve a Random Field without Duplicates

To ensure there are no duplicates, add a COUNTIF to the formula.

The RAND Function works exactly the same in Google Sheets as in Excel:

Use the RAND Function to calculate a random number between 0 and 1.
=rand()