This Tutorial demonstrates how to use the Excel INTERCEPT Function in Excel to calculate the y intercept.

The INTERCEPT Function Calculates the Y intercept for a best-fit line for known Y and X values.

To use the INTERCEPT Excel Worksheet Function, select a cell and type:

The INTERCEPT function in Excel is used to calculate the y-intercept of a line given known x and y values.

The INTERCEPT function can be used in conjunction with the SLOPE function to find the equation of a linear line,

The y-intercept of the line can be found by extending the of best fit backwards until it intercepts the y-axis: 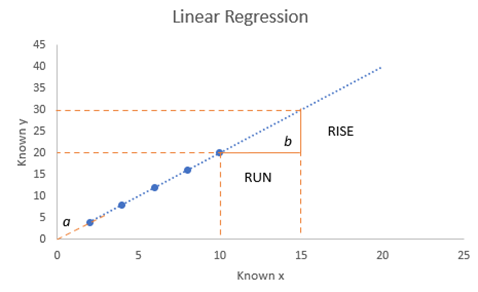 Using the above chart, we find the intercept, a to be zero. 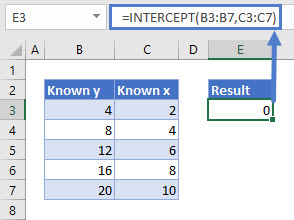 How to use INTERCEPT

Where known_y’s and known_x’s refer to the x and y data in your data table.

To pair SLOPE and INTERCEPT, an equation can be written as:

Pair INTERCEPT with SLOPE to see how to create the equation of a line and visit our other articles on Forecasting with Exponential Smoothing, TREND and LINEST functions.

The GROWTH function works exactly the same in Google Sheets as in Excel.

You can also use the INTERCEPT function in VBA. Type:
application.worksheetfunction.intercept(known_ys,known_xs)
For the function arguments (known_y’s, etc.), you can either enter them directly into the function, or define variables to use instead.

Return to the List of all Functions in Exce