This Excel Tutorial demonstrates how to use the Excel MOD Function to calculate the remainder after dividing.

The MOD function returns the remainder, or modulus, of a number after performing division. However, the MOD function isn’t strictly for helping us with our division problems. It becomes even more powerful for when we want to look for every Nth item in a list, or when we need to generate a repeating pattern.

To use the MOD Excel Worksheet Function, Select cell and type:

divisor – A number to divide by.

What is the MOD function?

The MOD function returns the remainder, or modulus, of a number after performing division. However, the MOD function isn’t strictly for helping us with our division problems. It becomes even more powerful for when we want to look for every Nth item in a list, or when we need to generate a repeating pattern.

When you try to divide 13 by 4, you can say the answer is 3 remainder 1. The “1” in this case is specifically known as the modulus (hence the MOD Function name). In a formula then, we could write

And the output would be 1.

Looking at this table gives some more illustrations of how the input/output of MOD will work. 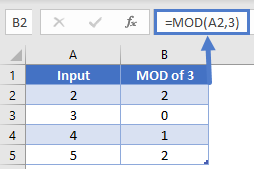 Note that when the input was 3, there was no remainder and thus the output of the formula was 0. Also, in our table we used the ROW function to generate our values. Much of the power of MOD will be from using the ROW (or COLUMN) function as we’ll see in the following examples.

MOD Sum every other row

For illustration purposes, the second column has the formula 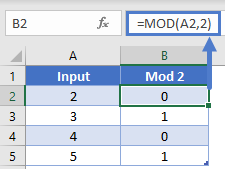 However, we don’t need to create the helper column at all. You can combine the power of MOD within SUMPRODUCT to do it all in one step. Our formula for this would be

Since it’s within SUMPRODUCT, the MOD function will be able to handle our array input. We’ve seen the output already in the helper column, but the array from our MOD in this formula will be {0, 1, 0, 1}. After checking for values that equal 0 applying the double unary, the array will be {1, 0, 1, 0}. The SUMPRODUCT then does it’s magic or multiplying the arrays to produce {2, 0, 4, 0} and then summing to get desired output of 6.

Since a formula of MOD(x, N) will output a 0 at every Nth value, we can use this to help formulas pick and choose which values to use in other functions. Look at this table. 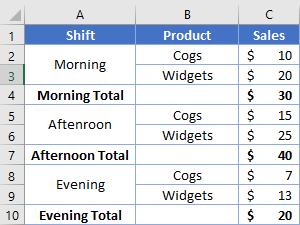 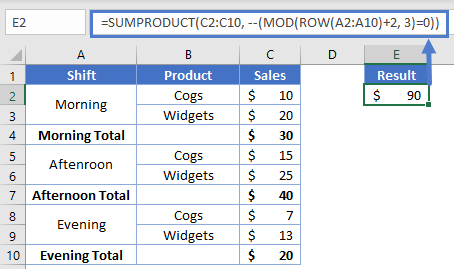 Our SUMPRODUCT’s criteria array is now setup how we need to grab every 3rd value, and we’ll get our desired result of $90.

We’ve been using examples so far that go vertically and use ROW, but you can also go horizontally with the COLUMN function. Consider this layout:

We want to sum up all the items. Our formula for this could be

In this case, we’re setup to grab every 2nd column within our range, so the SUMPRODUCT will only retain non-zero values for columns B & D. For reference’s here’s a table showing column numbers and their corresponding value after taking MOD 2.

Another common place to use the MOD function is when you want to have a highlighted row appear every Nth row. The general form for this will be

Where N is the number of rows between each highlighted row (I.e., to highlight every 3rd row, N = 3), and Offset is optionally the number we need to add or subtract to get our first highlighted row to align with N (I.e., to highlight every 3rd row but start at row 5, we’d need to subtract 2 since 5 -2 = 3). Note that with the ROW function, by omitting any arguments, it will return the row number from cell the formula is in.

Let’s use our table from before: 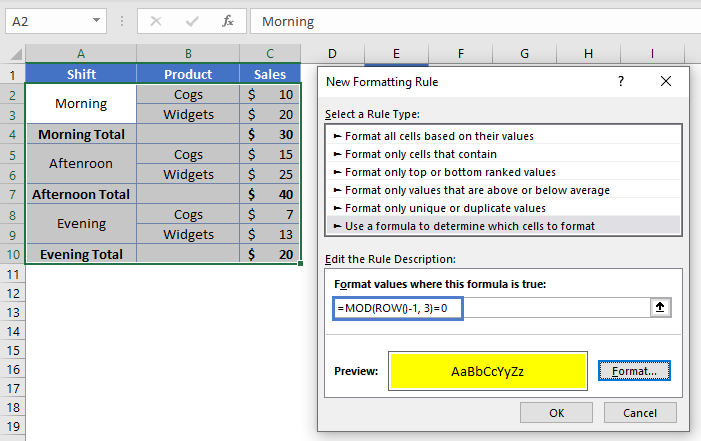 To apply a highlight to all the Total rows, we’ll create a new Conditional Formatting rule with a formula of

When the conditional formatting applies this formula, row 2 will see

Row 3 will experience a similar output, but then row 4 will see

We thus have our rule working correctly, as shown here: 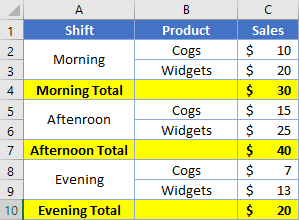 Highlight Integers or Even numbers

Rather than highlighting specific rows, you could also check the actual values within the cells. This could be useful for when you want to find numbers that are multiples of N. For instance, to find multiples of 3 your conditional format formula would be

Up to this point, we’ve been dealing with whole numbers. You can have an input of a decimal (e.g. 1.234) however and then divide by 1 to get only the decimal portion (e.g. 0.234). This formula looks like

Knowing that, to highlight only integers the conditional format formula would be

We’ve previously been using MOD to tell the computer when to grab at value at every Nth item. You could also have it be used to trigger a larger formula to be executed. Consider this layout:

We want to concatenate the names together, but only on every 3rd row starting on row 2. The formula used for this is 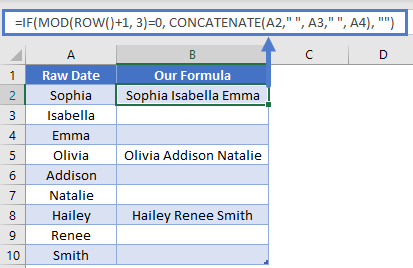 Our MOD function is what’s acting as the criteria for the overall IF function. In this example, we needed to add 1 to our ROW, because we’re starting at row 2 (2 + 1 = 3). When the MOD’s output is 0, the formula does the concatenation. Otherwise, it just returns blank.

If you’ve ever needed to count how many even or odd values are in a range, you’ll know that COUNTIF doesn’t have the ability to do this. We can do it with MOD and SUMPRODUCT though. Let’s look at this table: 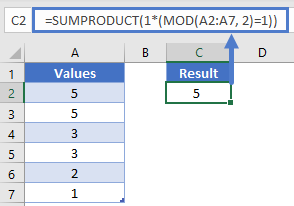 Rather than loading in some row numbers, our MOD is going to load in the actual cells’ values into the array. The overall transformation will then progress like so:

The SUMPRODUCT then adds up the values in our array, giving desired answer of: 5.

All the previous examples have been checking the output of MOD for a value. You can also use MOD to generate a repeating pattern of numbers, which can in turn be very helpful.

First, let’s say that we had a list of items we want repeated.

You could try and manually copy & paste however many times you need, but that would get tedious. Instead, we’ll want to use the INDEX function to retrieve our values. For the INDEX to work, we need the row argument to be a sequence of numbers that goes {1, 2, 3, 1, 2, 3, 1, etc.}. We can accomplish this using MOD.

First, we’ll start with just the ROW function. If you start with 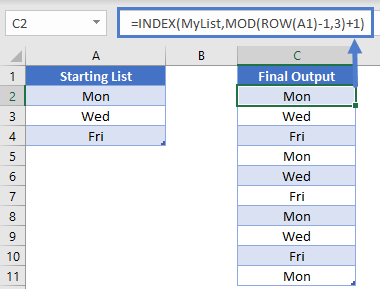 You can also use the LINEST function in VBA.

Within VBA, MOD is an operator (just like plus,minus, multiplication and division operators). So, executing the following VBA statements 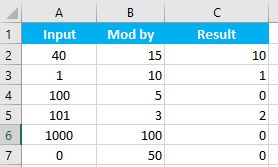 For the function arguments (known_y’s, etc.), you can either enter them directly into the function, or define variables to use instead.

The MOD Function works exactly the same in Google Sheets as in Excel: